Here’s how my day should have gone…..

Go to luncheon to celebrate Bill’s ten years with Vanguard.  Come home, friend comes over to hang out for a bit.  Friend leaves, go out for a few hours with another friend.  Come home and go to bed.

I left around 11:30am with plenty of time to get to Bill’s office.  Get a little way down 422 and traffic is backed up, big time.  I turn on KYW and find out that there is a sink hole in the right lane of the direction I’m traveling.  I call Kyra to let her know that I’m stuck but I’m going to take back roads so I’ll be a little late.  Exit 422 immediately.

Going down said backroad and stumble upon a road closure.  Due to the monsoon of the past few days the bridge is out.  Okay, I try another way, same thing, bridge is out.

Now I need to get back on 422 as there is no where else to cross the stupid Schuykill.  I’m going as fast as I possibly can, which is about 10mph.  I’m almost at the point where things are going to open up and Ken calls to say the presentation is over.  Well, what’s the point now?  I get off 422, cross over it, and get back on 422 the other direction and head home.

Now, I knew I was low on gas, but had everything gone the way is was supposed to I would have made it to Bill’s office no problem and stopped for gas on the way home.

However, since that’s not how things played out I ran out of gas.  Yeah, that was pretty much par for the course today.  I called my friend to cancel her coming over this afternoon as I wasn’t sure when I’d be getting home.

I called Kyra and she mentioned that Bill’s boss told him to take off and go home for the day.  Thanks Joe!!  I told Kyra the situation and Bill stopped at Wawa for a gas can and gas.  When he got to me I filled the tank and got in to start the car.  But, the car had no juice at all.  None.

There was a serious engine damage, but right there I remembered that Bill told me about the usage based car insurance that he had gotten just a week go, so I called them out and they showed up immediately to solve the issue.  I was finally on my way home at about 1:45pm.  Bill followed me to another Wawa near home where I filled my tank and then went across the street to a garage to have them test the battery.  It was going to be a ‘few minutes’ because there were a few cars ahead of me.  By now it’s 2pm and I’m hungry as I never made it to the luncheon.  I walked to No. 1 Chinese and got some lunch.  I decided that I’d open my fortune cookie early as I could really use some positive news.  Crack, crack, and it reads…… 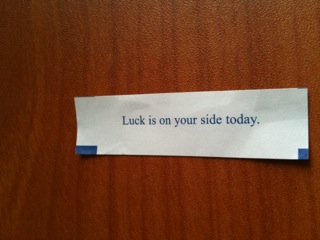 I am not even kidding. I’m not clever enough to make this stuff up.  All I could think of was, “I’d hate to see what my day would have looked like without luck being on my side!”

Oh, the battery, it failed.