What a month it’s been for all of us!  It certainly has flown by for me.

15-Aug-2008 15:46
View at Picasa
The biggest event in our lives in the last month was our moving to a new home.  I have to say that you really handled it like a champ.  You never thought it was odd that we were living amongst cardboard boxes for a month prior to the move.  You didn’t think anything was odd the night that all of our stuff was loaded on the moving trucks.  You just walked around checking out the empty rooms.  You slept well in the hotel that night.

You did have a few nights where you woke up and had to be rocked back to sleep in the new house though.  It was to be expected.  It was the only way for you to let us know that you had enough.  The move was over and you finally let us know the toll it had taken on you.  You also woke up very early the first few mornings in our new house to try to sort out the garbage the previous owners had left, despite knowing that the task would be more up the alley of Caledonian removals.

31-Aug-2008 18:02
View at Picasa
Now all is well.  You walk around the house like you’ve lived there all of your sixteen months.  You think that having two sets of stairs is pretty cool.  That was quite entertaining to you the first week in the house.  We’re glad the novelty has worn off though because we spent a lot of time chasing you on the stairs when we should have been unpacking.

You still want to be in the same room that Mommy and Daddy are in.  You have a big playroom full of your toys, but you don’t like to be in there unless one of us in there playing with you.  You will happily schlep your toys out to the room we’re in and play with them there.  What’s odd to us is that although you won’t play in there, you have no problem climbing the steps and running around upstairs without us.  You think it’s pretty cool that you can see down into the family room from the upstairs hallway.

We have such nice neighbors too.  All the moms and kids know you by name.  I seriously doubt they can remember Mommy & Daddy’s names though.  (That’s okay because the two of us are constantly asking each other what their names are.)  One of the families has a nice playset outside and although their youngest just started kindergarten they still have a baby swing on it.  They told us that you can swing on it anytime you want.  I don’t think anything in the world could have made you a happier kid.  You love nothing more than to swing.  The worst part is when it’s time to get you out of it.  You always fuss because, if we’d let you, you would stay in there for hours on end.

We’ve taken a few walks around the neighborhood.  Your favorite parts of walks are people watching and seeing the occassional dogs out for walks.  Everytime you see a dog you squeal with excitement and want to go pet them right away.  We’re so glad that we had Jaxon for a year with you.  It’s made you realize that dogs are not scary and it also made you a big fan of them.

I’m trying to think of what else has happened in the last month and it’s hard because the move has been very consuming.  We are pretty much settled in too.  We have a few more things to do, but none of them are urgent.  It’s nice to feel at home and get back into a regular routine.

I know what else is new.  You are starting to talk more.  And not just stuff that we can’t understand, but you’re saying more words.  You have mastered “more” and “no”.  Two great ones that will get you far in life.  Another fave, when you’re hungry is “cheese”, you do take after Mommy! You have also started calling me “Mommy” rather than “Momma”.  You rarely call Daddy anything.  Sometimes a “Dad” will slip out, but that’s a rare occurance.

You like looking at photos and having us tell you who is in the picture.  Sometimes you repeat the names.  You are getting better at saying “Maiah” and “Bobbi”.  Once in a while you’ll say “Elijah” and “PaPa”.

We’re looking forward to many more fun months in our new house. 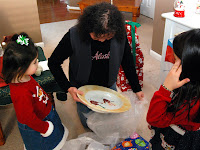