So Rylee a/k/a Sprout decided to come four and a half weeks early! After going to the hospital at midnight last night to confirm that Diane’s water had indeed broken (and had actually started leaking on Wednesday), Diane was given drugs around 2am to start the dilation process.

12-May-2007 12:35
View at Picasa
When I got back to the hospital around 9am this morning, Diane was about 4cm dilated and started on pitocin to induce labor. By 11:15am or thereabouts (I lost track of the time), Diane was was confirmed 6cm dilated and it just started snowballing from there. Next thing I knew hair could be seen, Diane started pushing, and minutes after that, Rylee had joined the world. It was incredible.

Both sets of grandparents were visiting all day. More details in the days ahead, but for now I’m going to bed.

More details to follow, but Diane’s water broke, and it was realized late last night. At the hospital around 1am, it was confirmed that her water was indeed broken, and the doctors are in the process of inducing her.

As for me, I’m home to take care of Jaxon and get the car seat installed and other baby accessories that can help the kid and  they can be find at https://bestbabyaccessories.com. and then back to the hospital. 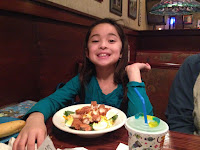