You know how you get up in the morning, go about your day and you get a phone call at some point that changes your day?  That happened to me on Monday.

I got a call from a friend of mine in Florida.  I was surprised to hear from her, especially in the middle of the day.  She called to ask me if I remembered how to tell if a certain brand of pregnancy test showed the results.  I sent these to her quite a while ago and I had no clue anymore. I felt badly at first, but then she described what she was looking at, two lines. One a strong pink and the other there, but not as strong.  Now in the world I live in, if you’re trying to get pregnant, lines are good.  I told her to go out and by two digital tests that show “pregnant” instead of lines.

I was excited, but trying not to get too excited.  You see, this is a friend who has been through the ringer.  She and her wonderful husband have been trying to get pregnant for FOUR years.  In that time I have had two babies.  They have been to so many specialists, accupuncturists and whoever else has a degree in helping you get pregnant.  They have also had their hearts broken a few times in the adoption arena.  To say that these two want to be parents is the understatement of the century.

Well the digital tests both showed PREGNANT.  Now it’s time to get more excited!  She called her doctor and went in to have blood drawn because we all know this is the be-all-end-all when you need to find out if you’re pregnant or not.  To say that the 24 hours we all waited to find out the results was a long time is again an understatement.  That said, if you heard lots of screaming, jumping up and down and general shreeks of happiness around 3pm yesterday it was a big group of friends celebrating an even bigger miracle.  There are eight of us along the East Coast and one in the middle of the country, but I think we made enough noise that the entire country heard us scream with excitement.

So go through your day today and maybe you too will get a call that will remind you that God does answer prayers with miracles.

Yesterday I had my regularly scheduled 39th week  OB appointment.  It was pretty much the typical appointment until I was told that I was going to be taken out of work.  Yay!!!!  I’ve been rather uncomfortable for a few weeks now so this was fine with me.

Now I’m supposed to hang out here at home and rest and wait for things to progress.  I’m currently 2+cm dilated and 80% effaced.  Big deal really.  Squirt hasn’t moved down into position yet so it may be a while till we get to the maternity floor of the hospital.

The doctor I saw yesterday is my fave and the one who delivered Rylee.  She’s a lot of fun and I really hope she gets to deliver Squirt too.  She’s going to be at the hospital today and next week on Friday and then Sunday.  So if I want her to do the honor then I need to get things moving quickly or else settle in to wait another week.

I’m pretty sure you can guess when I’d like to see her again. 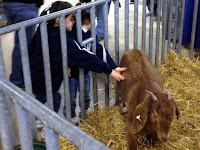