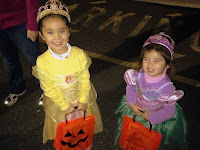 Last night was our church’s annual Trunk or Treat event.  This is the second year we’ve taken the girls and they really had a lot of fun.

We took Princess Belle and Princess Ariel around to the different cars to play games.  Each car has it’s own theme and usually has a game for the kids to play and then they get candy. 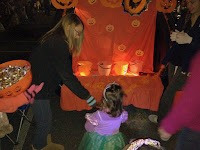 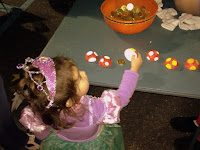 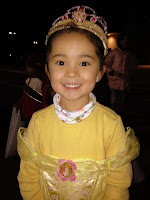 When we were in the car afterward Rylee said, “This was a fun night!”

11-Nov-2008 19:37
View at Picasa
18 months already! I can’t believe it! You really are a toddler now with no resemblance of a baby anymore. That’s okay though because we are having so much fun right now.

The biggest fun we had in the last month was your first trip to Walt Disney World. That’s right, you did great on the flight to Orlando and were ready to hit the parks when we got there. 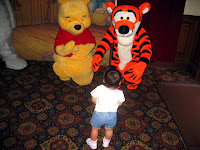 We went to Epcot first and this is where you had your first character greeting. I have to admit that Daddy and I were a bit nervous to see your reaction, as at this age we knew you’d either love them or go screaming and running the opposite direction. We were so excited to watch you meet Tigger, Pooh Bear and Eeyore. You literally stopped in your tracks and just stared at them. Then you looked at the two of us and had a big smile on your face. Daddy was in charge of the camera and he got lots of great shots of you seeing your ‘friends’. 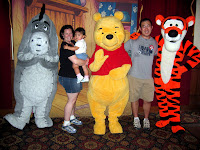 After the initial shock you went over to them and gave them each a high five. You weren’t too sure what to do after that so I picked you up for some more photos. After your time was up and we were walking away you were doing all you could to keep them in your line of sight. You kept waving to them because you didn’t want to leave them.

We knew it was going to be a fun trip at that point. You developed your own character greeting after this. You would give the character five and then you’d bop them on the nose. It was cute. We did make the decision to keep you away from the princesses though as they would have no protection for their faces.

Chip and Dale decided to grab you and tickle you after they were bopped on the nose. We have some great photos of you laughing while they played with your belly.

We stayed at the Animal Kingdom Lodge and really enjoyed seeing the animals from our balcony. You weren’t so impressed with the animals, but you did have fun running around on the balcony. We think that next year you’ll enjoy the animals much more. We had a great time there with our friends Justin & Lea.

You really had a lot of fun at the shows we saw. You would clap the whole way through because you thought they were so neat. Another thing that you really enjoyed was all the music. And the best part is that when you hear music, you can’t stay still. So most days you managed to dance you way through the parks. The most fun was when we saw Off Kilter in Epcot. I think the crowd spent more time watching you dance than they did watching the band.

31-Oct-2008 17:32
View at Picasa
After getting home from our trip it was time to get you a Halloween costume. I really did wait till the last minute, but it paid off because I got your costume for a mere $4. You made an adorable Tigger too. You just had zero desire to put the hood up and really complete the look. You only went out trick-or-treating to a few houses, as we don’t know too many folks in our new neighborhood. We did you back to the old neighborhood to see Kayla though. The two of you had fun going to one house together. For you the most fun was the kids who came to our house and office and played with the office chair. You sat on the bottom step just inside the front door waiting for the doorbell to ring. When it happened you would jump up, run to the giant bowl of candy and pretend you were going to pick it up. Once I grabbed the bowl you went running to the door to see what fun was waiting for you. After I gave the kids their candy I couldn’t close the door until the kids were out of your line of sight. Then you would close it and sit and wait for it happen all over again. You were in your costume so the kids had fun seeing you too.

31-Oct-2008 17:49
View at Picasa
Two weeks ago Daddy painted the nursery so that we can start getting things ready for Squirt’s arrival. You still don’t have a clue that there’s a baby on the way or what it means for our little family. There are times when you will pat my belly and give the baby hugs. I guess something is starting to click for you. I’m thinking that once we get the nursery set up you might start to understand a bit more.

We are once again looking forward to a fun holiday season with you. I think this Christmas will be full of fun and craziness.