Rylee has another cold and this time it’s a doozy. She actually has bronchiolitis which is causing her severe congestion and as a result coughing. It is especially bad when she lays down to sleep. This made for a very long night for both her and I last night.

Bill stayed at home with Rylee today and took her to the pediatrician. He came home with a nebulizer that we’ll use to give Rylee breathing treatments up to four times a day. This treatment helps to open her lungs and allow easier breathing. She has had two treatments today and we think she’s breathing a bit easier. I’m hoping that because of this we have a night with more sleep than last night.

The doctor also said that he saw what could be the beginning of an ear infection. We’ll keep an eye on that. If we notice that she’s tugging at her ear then we’ll be giving her an antibiotic that he prescribed as well. We’re hoping this doesn’t develop into a full blown infection though.

As always, there’s never a dull moment around here.

22-Sep-2007 15:16
View at Picasa
I cannot believe another amazing month has already flown by and that you are already five months old! We have definitely had an interesting month.

We started the month with your second road trip. We took a weekend trip up to Portville, NY to spend the weekend with Sue, Jeff and their kids Kyrell and Katie. You and Katie were two very happy babies who are both big Penn State fans. Kyrell is enjoying being a big brother to Katie and had fun with both of you.

After this trip you got your first cold, along with Momma getting her first of the season. We were a mess for a few days but Mommaeventually got better. Unfortunately you did not. Instead yours fell into your chest. This was alarming because when you have to cough your entire body is involved and it just looks so painful. You are quite the trooper though because through it all you have been such a happy girl.

Two nights ago I took you back to the pediatrician though because your chest was sounding raspy again. The doctor confirmed that you do indeed have Bronchitis. Today is your third and final day on antibiotics to clean this out of your chest. You have been coughing less and not coughing as hard as a result. Your Zantac dosage was increased as a result of this. Between the two you are doing very well.

You have been such a joy to be around this month, as always! You have been discovering so much. You have found your left thumb, but not as a means of pacifying yourself. You just seem to chew on the tip of it. Daddy and I believe this is due to some teething that is going to happen soon!

You have also started to really play with your toys. Before we would have to hold them while you sucked on them. Now you pick them up and lift them to your mouth all by yourself. You are also playing with the items on your exersaucer and we’ve even caught you talking to them.

06-Oct-2007 13:37
View at Picasa
Speaking of talking….you have had a lot to say recently. You seem to talk via different noises. You’ll spit, giggle, coo and scream. You also talk with your eyes which is funny because you seem to do that mostly when you really want to make a point.

Although, for the most part, you are still very indifferent to the dog you are starting to reach out to touch him. But not when he decides to sniff the top of your head when your playing in your Bumbo seat. He is still very interested in you. I can’t wait until you two start playing together. Hopefully you won’t share your toys with him.

Since it is Penn State football season you have also spent a few weekends with your grandparents. You’ve done well overall and Momma & Daddy are doing well too. It’s still hard to leave you for two days, but we do enjoy ourselves at the games. This weekend you are going to stay with Uncle Danny & Aunt Lorrie and Maiah, Zoie & Evan. We think you are going to have a lot of fun there. We know that Zoie will be very attentive as always. We’re hoping you might even take some cues from Evan and start rolling over.

12-Oct-2007 06:37
View at Picasa
You have had a few growth spurts this month as well. Right now you are taking a 9oz bottle four times a day as well as eating cereal two times a day. You are a whopping 18 pounds and the doctors are pleased with your growth. There is no hint of you being a preemie anymore. Daddy noticed the other day that your current growth spurt is making you grow upward, whereas the last one brought with it a bigger belly.

I continue to enjoy waking you in the mornings and playing with you before we head out the door to start our days. We have a special wakeup song that always puts a big smile on your face. (Thanks Bobbi!) And that smile is on your face for the majority of the day as you are such a happy and content little girl.

I can’t wait to see your new discoveries over the next month. 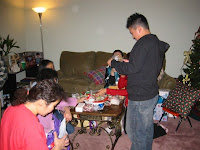