After attending Bill’s cousin’s wedding in New Jersey on Saturday we decided that we needed to get up and get some things done today. By the way, the wedding was beautiful and there was more food at the reception than I’ve ever seen at one before. It was a nice day all around. We’ll put some photos up in our photo album soon.

Today Bill tackled the small wall around the front flower bed. We got approval from the housing committee about a year ago to put it in. We figure that approval is still good. He also put in the solar lights. They look pretty cool tonight. He’s going to put another wall around the tree in the front yard. A project for another weekend. And yes, we do realize that there is a shutter missing, we’re working on having that corrected.

Friday evening we got the call that the crib mattress we ordered was in and two weeks early! Today I ran out to get that so that I could put the finishing touches on the crib. Basically put everything in it. That was my smaller project. I also got lots of other stuff done around the house today. Don’t think that doing the crib wiped me out for the day.

Our pack ‘n play is also now set up and ready. I’m considering starting to pack a hospital bag. Some people feel that I should already have it done. I’m thinking that the calendar needs to be flipped to May for me to get it ready. I know that’s only two days away, but maybe in another week or so I’ll start it.

So here’s a few photos to go under the heading of “Lookie what I did!”

These are the pictures of the nursery that were originally on the old home page of www.themafamily.net.

The nursery is decorated around three works of art that are Pooh themed. Two are production cels of Pooh and Tigger with their original pencil sketches, and the last is of Tigger by David Willardson. 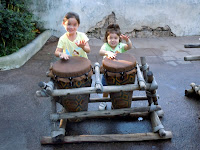