Rylee has another cold and this time it’s a doozy. She actually has bronchiolitis which is causing her severe congestion and as a result coughing. It is especially bad when she lays down to sleep. This made for a very long night for both her and I last night.

Bill stayed at home with Rylee today and took her to the pediatrician. He came home with a nebulizer that we’ll use to give Rylee breathing treatments up to four times a day. This treatment helps to open her lungs and allow easier breathing. She has had two treatments today and we think she’s breathing a bit easier. I’m hoping that because of this we have a night with more sleep than last night.

The doctor also said that he saw what could be the beginning of an ear infection. We’ll keep an eye on that. If we notice that she’s tugging at her ear then we’ll be giving her an antibiotic that he prescribed as well. We’re hoping this doesn’t develop into a full blown infection though.

As always, there’s never a dull moment around here. 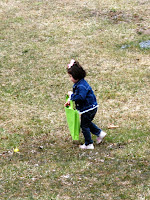