Rylee just turned 5!  Wow, I cannot believe that this is the year she will be boarding the bus and heading to kindergarten.  But let’s not get ahead of things….

In keeping with the past two years Rylee wanted yet another princess party.  Bill and I really wanted her to have a theme that would also be appealing to the boys in her class so Bill suggested a Pirate & Princess party.  Rylee thought that was a great idea and got excited about what she would wear and what we would do at the party.

I knew right away that I wanted to hire someone to do face painting for the kiddos.  I thought this would be fun and add to the theme.  I hired Stacey’s Face Painting and the kids loved it.  Well…the girls loved it.  The boys, not so much.  But our friend Michael thought it was great and Paula said it was tough to get him to take it off to go to bed that night.

Some of the moms even got in on the face painting!

The kids came dressed in their finest ball gowns and pirate attire.  I will say that I think my dad stole the show.

The kids played a game where the kids used a pirate hook to pick up pretzels.  Brooke won with over 20 pretzels!

We had a pirate and princess food for lunch as well.

Everyone enjoyed the cupcakes as they had either pirate or princess rings on them!

Here is our royal gang…

And here are the princesses and pirates…

Rylee said it was “the best day ever!”.  I think that’s the best thing a five year old could say about her birthday party. 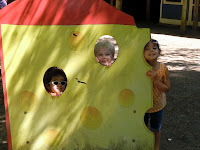