27-Aug-2012 08:21
View at Picasa
I can’t believe that Rylee has started Kindergarten already.  It was just a few weeks ago she was figuring out how to crawl!

Rylee has been VERY excited to start Kindergarten.  Every time we would pass her school in the last few weeks she’d say, “That’s where I will go to Kindergarten!”

The first day really couldn’t have gone any better.  She met two new friends at the bus stop who are not only in her grade, but in her class.  She sat with them on the bus to and from school.

When the three girls got off the bus they all wanted to play together.  That just warmed my heart.  Rylee has been in need of friends her own age and it has finally happened.

27-Aug-2012 11:50
View at Picasa
All the moms agreed that after lunches the girls could get together.  I took Rylee to lunch and as we were getting in the car I got a text from one of the moms asking if Rylee wanted to come over and play with her daughter.  I told Rylee and she immediately asked me how many minutes it would take to get home.

Those three girls played together ALL afternoon.  I was expecting to have Rylee home with me so I wasn’t sure what to do with myself.

The second day of school Rylee invited her friends over as soon as she got off the bus.  So after lunch the girls came over and played all afternoon again.  I was amazed at how quiet they were.  They played in the playroom, played with Play-Doh (note to self: next time they do that outside instead of at the kitchen table) and I pulled out my beading supplies and they all made some bracelets.  What a fun afternoon!

28-Aug-2012 15:58
View at Picasa
It’s really fun watching Rylee develop friendships that will (hopefully) last for many years.  I look forward to looking back at these photos with her when she’s older.

That was the answer Rylee gave when I asked her why she used pink nail polish to paint polka dots on her green curtains. 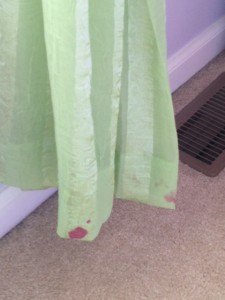 She also thought it made Lambie and Monkey look pretty too. 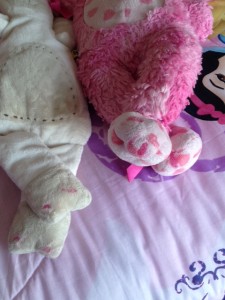 Needless to say all nail polish is now far out of her reach!