This past weekend we went to State College for the annual BrewExpo. I did not attend this year because we had Rylee with us, but Bill went with some of our friends and had a great time.

We got to town Friday afternoon which gave us time to visit the Lion Shrine and get some photos. Rylee was awake and in a great mood so we got some fun shots. I’m sure there will be many more over the years. Here is her debut as a lion cub….

So we couldn’t figure out what we wanted to do last Sunday. We wanted to get out of the house but couldn’t decide where to go. We were on the verge of driving down to Rehoboth Beach before I recalled a recommendation that Flick had given us for a great beer store in Maryland that he and his wonderfully understanding wife Tori frequent.

Unfortunately I couldn’t recall the name of the place.

Now I know that you can get good beer in PA, but if you’re from PA, you’re no doubt familiar with Pennsylvania’s bizarre case law. I don’t want to have to buy a case in order to try a new beer. You guys in most of the rest of the country got it easy: You can buy beer by the bottle.

So after calling Flick to get the name of the store (thanks Tori! apparently Flick sleeps in very late on Sundays), we hit the road. After a stop at Grotto Pizza in Newark for a yummy lunch, we finally arrive at State Line Liquors in Maryland. An hour and a half later, Diane’s minivan was full with a couple growlers (that is so cool, a beer store filling growlers), a few six packs, a dozen or so bombers, and about 60 other bottles of beer.

Check out our haul: 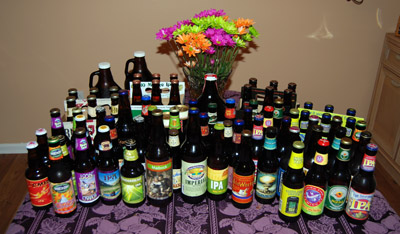 The flowers aren’t from the beer store, but I thought they looked cool as a backdrop to all of the colorful beer labels. 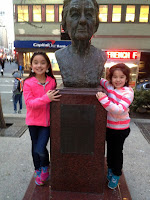