The Verizon DVR sucks. The “Series Recording” feature is like 24’s season 2. Trying to copy previous success (as in TiVo’s much smarter Season Pass feature) and failing miserably.

The main difference is that when you set up a Season Pass to record only new episodes, that’s exactly what the TiVo does. On the Verizon DVR, I set up a Series Recording for new episodes of The Simpsons, which is on Sundays at 8pm on FOX. The problem? Well, our local FOX affiliate also runs syndicated episodes twice a day, and the Verizon DVR wanted to record them all. Ugh! That would have filled up the hard drive in no time!

And then there’s one of my favorite shows, Mythbusters. Now that we have HD, you bet your patooey that I’m going to be recording that in HD. And I only want new episodes. But apparently, Discovery HD ran a mini-marathon over the weekend, and the Verizon DVR nicely recorded them all, leaving almost no room for the actually new episodes of our Monday-night shows.

So I called up TiVo to find out what kind of deal I could get for the TiVo HD. They offered to knock off $100 of the price as well as transferring my existing multi-service discount over to the new unit at the old prices (our second TiVo had a monthly subscription grandfathered in at the old rates when TiVo increased the monthly rates earlier this year). That was quite a bargain!

After ordering the new TiVo, I now called up Verizon to order two CableCARDs for the TiVo (so that the TiVo could decode the channel streams). After a lengthy discussion with the associate that I talked to (he turned out to be extremely knowledgeable, unlike some of the other reps I’ve talked to before), he set everything up for me, and we’re scheduled for Wednesday to get the TiVo set up and to return the p-o-s DVR.

So our household is officially Comcast-free!

We’ve taken the leap and switched to Verizon FIOS for both our TV and Internet. Up until now, I had been waiting for FIOS TV to become available in Limerick township, and it was as of the beginning of this month.

The technician was here about five hours on Friday installing all of the FIOS equipment. Despite some of the horror stories I’ve heard about the installers, this guy knew what he was doing.

We also have the Motorola QIP6416, the dual-tuner HD DVR from Verizon. This will replace the two TiVo Series 2 units as our primary DVR. We’ll probably keep one TiVo hooked up (one has a lifetime subscription on it) so that we can still use TiVoToComeBack (TTCB) in conjunction with pyTivo to transfer shows from my computer to the TiVo.

I gotta say, the TV service is superb, and I’m getting a heck of a lot more channels for less money than we were with cable.

Jury’s still out on the Internet service, everything still works, but I’m curious how the max speeds compare to cable. 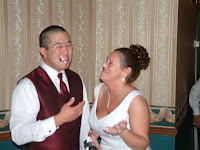