Rylee celebrated her 24th hour without much fanfare. She was off at the nursey getting herself checked out by the nurses, as Diane and I were finishing up lunch (the long fabled Italian sub).

13-May-2007 09:48
View at Picasa
So far, Rylee’s nursing as well as can be expected. Because she was premature, we still have to supplement the breast milk to keep her glucose levels up, but overall she eats very well–you should see her suck down a bottle of formula.

However, Rylee’s progress hit a hiccup around 1pm. As the nurses were getting ready to bring her back to us, Rylee had an episode of apnea. AOP is common in preemies because her autonomic nervous system isn’t fully developed yet and will usually go away as they mature. Luckily, Rylee started breathing again on her own but is now being monitored in the NICU.

13-May-2007 16:07
View at Picasa
In the NICU, she’s hooked up to monitors to keep tabs on her vital signs. Rylee was in the infant warmer for the first few hours, where she happily made herself comfortable in just her diaper, all laid out like it was a day at the beach. She was moved into a normal crib after her 8pm feeding.

Rylee will need to be monitored for 48 hours, which means she won’t be coming home with us when Diane is discharged on Monday. At the earliest, she will be coming home on Tuesday. Stay tuned!

So Rylee a/k/a Sprout decided to come four and a half weeks early! After going to the hospital at midnight last night to confirm that Diane’s water had indeed broken (and had actually started leaking on Wednesday), Diane was given drugs around 2am to start the dilation process.

12-May-2007 12:35
View at Picasa
When I got back to the hospital around 9am this morning, Diane was about 4cm dilated and started on pitocin to induce labor. By 11:15am or thereabouts (I lost track of the time), Diane was was confirmed 6cm dilated and it just started snowballing from there. Next thing I knew hair could be seen, Diane started pushing, and minutes after that, Rylee had joined the world. It was incredible.

Both sets of grandparents were visiting all day. More details in the days ahead, but for now I’m going to bed. 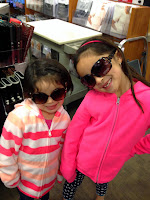