Sunday 1:47am: Carlos Ruiz hits an infield single to bring in the winning run in the bottom of the 9th to give the Phillies a 5-4 win and a 2-1 World Series lead.

Sunday 4:11pm: After a blown call, Brian Westbrook breaks open for a 39-yard touchdown to put the Eagles up by two scores en route to a 27-14 over the Atlanta Falcons.

Sunday 9:49pm: Ryan Howard hits the first of two home runs, scoring Jayson Werth and Jimmy Rollins to put the Phillies up 5-1, which would end up being enough to beat the Rays 10-2 and take a 3-1 lead in the World Series.

One more Phils win sure would make this 3-day stretch complete!

Competition: If you can’t beat them, untie their shoelaces. 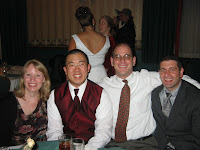